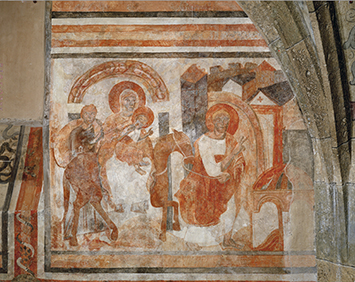 around 800:
frescoes in the convent church

Convent church and its frescoes:
centre of convent life

For over 1200 years the church has been the centre of life in the monastery/convent: still today we can admire its unique frescoes that tell the history of salvation.

The nave was originally a plain hall with smooth, high walls and a flat, wooden ceiling. All around the church the walls were painted with a splendid, colourful depiction of the biblical history of salvation 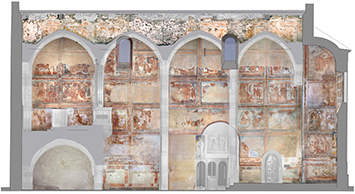 The murals are very precisely arranged, but have lost their original colourfulness

The arrangement of the Carolingian murals is best understood by looking at the north wall. There are five rows of pictures in a grid divided into rectangular fields, each of which contains an individual scene.

Today the monotonous reddish and earthy colours render a pallid picture of their original luminance, colourfulness and plasticity. They have suffered from the effects of fires, age and human interference. 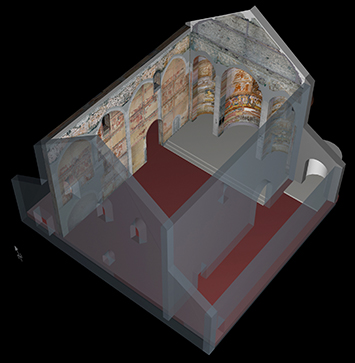 The Carolingian frescoes tell a story

The murals would have been painted for erudite monks as a visual support for their meditation on the message of salvation. The row of frescoes above the vaulted ceiling depicts Old Testament scenes from the life of King David. Below the ceiling the three middle rows are dedicated to the childhood of Jesus, his ministry and miracles, followed by the Passion. The lowest row, which is almost completely destroyed, illustrates the works and martyrdom of the apostles.

The upper row on the east wall, which is hidden by the vaults, shows the scene of the Ascension. In the apses we see Christ represented three times: in the centre as the Light of the World, enthroned in glory in a double mandorla, surrounded by the symbols of the four evangelists and accompanied by a band of angels. In the north calotte Christ hands the key and book to Peter and Paul, representing the Foundation of the Church. The gem-studded cross in the south apse, with the central Christ medallion represents Christ’s Triumph over Death. The lower rows of the apses are dedicated to the eponymous patron saints of the altars: Saint John the Baptist in the middle, Peter and Paul in the north, and Stephen in the south. The west wall depicts the return of the Son of God and the Last Judgement. 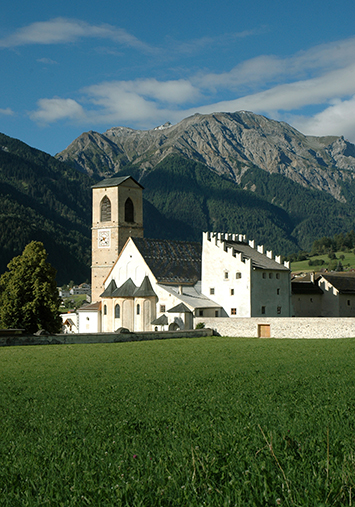 Although Müstair is especially well-known for its Carolingian murals, their days of glory were only short-lived as over the years they were successively painted over and covered. They only came to light once again when two art historians, Josef Zemp and Robert Durrer, rediscovered them in 1894. From 1947 to 1951 restoration work was carried out to uncover them.