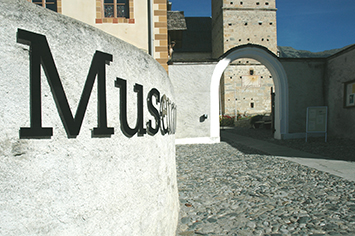 2003: Opening of the convent museum in the Planta Tower

Originally the convent museum was housed in the residence of the prince-bishop, in the west wing of the convent. On 13th July 2003 the newly designed museum in the Planta Tower was opened. Open daily, the museum offers guided tours, led mostly by local inhabitants, in German, Italian, English, French and Romansh.

On 24th September 1994 a light earth tremor caused considerable damage to the neighbouring Fürstenburg in Burgeis, South Tyrol. Similarly large cracks appeared in the Planta Tower, increasing the danger that a further earthquake could cause the walls to collapse. Urgent repair work needed to be carried out, incurring major expense.

Up till then the tower had been used as a depot, which was no longer suitable in the newly restored rooms. The <Stiftung Pro Kloster St. Johann in Müstair> therefore proposed that the convent museum should be redesigned and housed in the Planta Tower. The convent voted in favour of this proposal.

Alongside structural clarification and construction measures, archaeological investigations were carried out. These revealed the fascinating building history of the tower. Contrary to earlier belief the tower was not built during the reign of Abbess Angelina Planta, but 600 years earlier. Archaeologists found supporting beams within the walls, which could be dated using dendrochronology. The timbers were felled in autumn/winter 957/958 and spring 961; this means that the tower is the oldest fortified residential tower in the Alps. 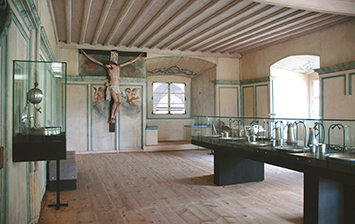 A convent within a convent

The museum concept was designed by Raphael Sennhauser, art historian and former manager of the Pro Kloster St. Johann in Müstair Foundation. By concentrating on the essentials and only exhibiting a small number of objects the rooms could speak for themselves. Convent life, art and building history all find their place alongside one another in the Planta Tower. At the same time, the proximity of the tower to the church enables visitors to admire the world-famous frescoes.