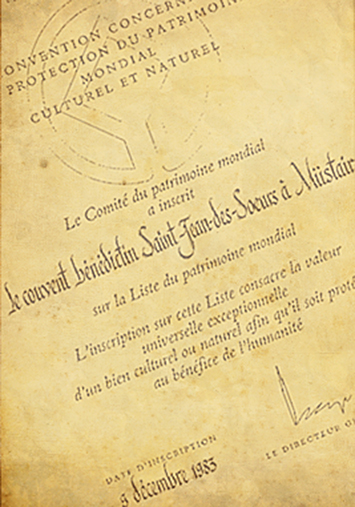 1983: Inscription of the
Convent of St. John in the
UNESCO World Heritage List

It was decided to inscribe the Benedictine Convent of St. John in the UNESCO World Heritage List at the ordinary session of the World Heritage Committee from 5 – 9 December 1983, in Florence. The Convent of St. Gall and the Old City of Berne were also inscribed at the same time; so too were the famous sites of Machu Pichu and the Taj Mahal. 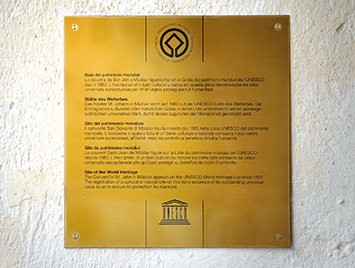 Justification for inscription in the UNESCO World Heritage List

The curator of monuments Hans Rutishauser justified the convent’s nomination for inscription as follows:
“St. John’s Convent in Müstair bears exceptional testimony to Carolingian art and culture. With the exception of the flat ceiling and the roof timbering, the triapsidal church has been preserved intact. It is decorated with Carolingian frescoes. The coherence between the Carolingian structure and its décor is unique in Europe. There are still extensive remains of the Carolingian monastery within the convent complex that have not yet been researched. Ongoing excavations reveal fundamental knowledge of the history of its construction. Moreover, in the convent there are also important High Middle Age and Late Middle Age, as well as Baroque, interiors.”
(H. Rutishauser, 8.11.1982, in: Convention concerning the Protection of the World Cultural and Natural Heritage. Nomination to the Wold Heritage List). 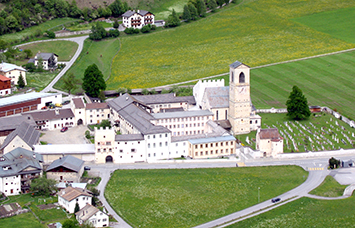 Testament to the golden age of Christianity; Cultural Heritage of Humanity

The convent of St. John in Müstair is testament to the golden age of Christianity around 800 and is a cultural heritage of humanity over the ages. It is much more than a monument; it is a living cultural treasure. Today the nuns continue to live in accordance with the monastic rule of St. Benedict, following the motto “ora et labora et lege” (pray and work and read).

The fact that the entire convent complex – and not just the church – was placed under protection has proved to be farsighted. The most important cycle of mural paintings from the Early Middle Ages and the Romanesque frescoes are world famous. In addition in the church there is the oldest, once colourfully painted, monumental statue of Charlemagne. Thanks to archaeological investigations further sensational discoveries have been made. The Chapel of the Holy Cross was thought to be from the Romanesque period, but it has turned out to be a Carolingian architectural and artistic treasure. The Planta Tower was not built, as originally thought, by Angelina Planta at the end of the 15th century; it had already served as a fortified residential tower in the 10th century. In the field of fortress research it is without parallel. Large parts of the 11th century bishop’s residence still remain; this includes the delightful two-storey chapel of St. Ulrich and St. Nicholas.

Many years of archaeological investigations have resulted in an understanding of the structural development of the convent complex and continue to provide a constant source of new knowledge and astonishing results. 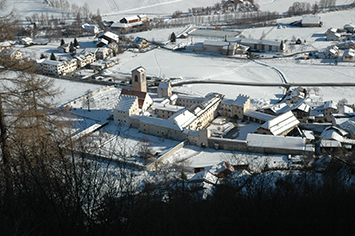 Support of Foundation and Friends