With the help of the nuns

From 1947 to 1951 restoration of the convent church was carried out under the direction of architect Walther Sulser, accompanied by Professor Linus Birchler who was then president of the Federal Commision of Historic Monuments. With the assistance of the administrator Pater Placidus Berther and several nuns the restorer Franz Xaver Sauter uncovered the Middle Age paintings. The use of scrapers and small hammers caused some of the paintwork to be lost; missing pieces were filled in and colour matched, whilst individual scenes were vaguely completed.

Romanesque paintings can be seen in the museum

Some of the paintings that were removed can now be seen in the convent museum. Two scenes are on permanent show in the German Historical Museum in Berlin, along with a cast of the Müstair statue of Charlemagne; further paintings are stored in the Convent of St. John in Müstair.

These wall paintings date from 1200, when the former monastery of monks became a convent of nuns. 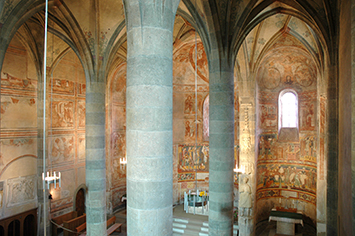 Difficult to date the Carolingian frescoes

It has not been possible to date the Carolingian fresco cycle precisely. Art historians suggest the first half of the 9th century. These wall paintings would have covered the walls completely, extending into the furthest corners. The arrangement of the fresco cycle is best understood by looking at the north wall.