1758: Chapel of Grace, built for the Holy Blood relic

In 1758, under Abbess Maria Angela Katharina von Hermanin zu Reichenfeldt, a chapel was erected to enshrine the Host of the Holy Blood; this is today’s Chapel of Grace, to the right of the choir. The miracle of the Host of the Holy Blood had its origin back in the 13th century and drew many pilgrims to Müstair. In 1767 benefactors donated two new altars for the veneration of this miracle; one of them still stands today on the east wall of the chapel. 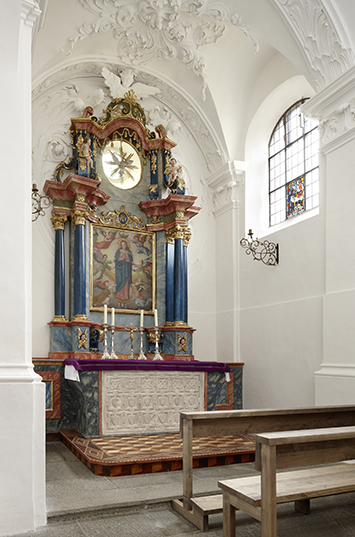 The Host is lost; the Assumption of the Virgin is brought to Müstair

In 1799, 41 years after the chapel was built, the Host of the Holy Blood was robbed by the French during the War of the Second Coalition. It is very likely that the chapel suffered damage at the same time. Years later, when the oil painting from 1621 depicting the venerated Assumption of the Virgin was brought from Santa Maria in 1838, Müstair once again became a pilgrimage destination. The altar retable was adapted to accommodate this oil painting. 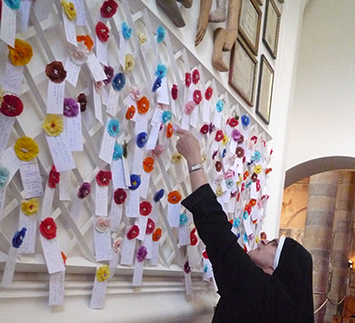 Votive offerings hang on the western wall of the chapel; these are made either to ask for deliverance or to offer thanksgiving for a favour that has been granted. Visitors can write their request, thanks, or their petitionary prayer on a sheet of paper decorated with a paper rose and hang it on the votive wall. The nuns in Müstair regularly take the votive offerings down in order to include them in their daily prayers. 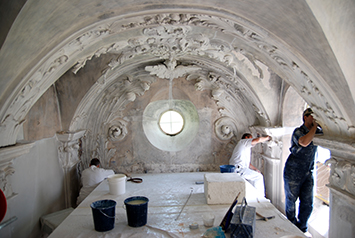 Restoration in 20th and 21st century

In 1904 the chapel interior had to be repainted; snow sliding onto the chapel roof had caused it to cave in. In 1938, on the occasion of the 150th anniversary of the Assumption of the Virgin being brought to Müstair, the chapel was once again given a facelift; Josef Malin decorated the chapel with stucco and installed the Carolingian marble slab as antependium in front of the altar support.

1949-1951 the two windows on the southern wall, depicting St. Placidus and St. Nicholas of Flüe were installed, the floor was laid with granite slabs and the wall lamps were electrified. In winter 1994/95 freezing melt water caused considerable damage to the stuccowork. In 2006 the roof was renovated and in 2010 the interior was restored.