Ursula V Karl von Hohenbalken entered the convent, aged 16, in 1613. She was elected prioress in 1625, leaving an older nun, Katharina Mohr, to be elected as abbess. Five years later she had her own private suite installed; this comprised an anteroom, a parlour and bedroom. An unusual move – such a suite was normally the prerogative of abbesses.

Ursula V Karl von Hohenbalken came from an old ministerial family of Val Müstair. The family possessed the “Balcun At” castle on the opposite side of the valley, of which only a few ruined walls remain today. Several female members of the Hohenbalken house entered the convent; three of them were elected as abbesses. Ursula V, abbess from 1640 – 1666, was the most active initiator of building work.

“No other building turned out as monastically cosy as this little room” wrote Josef Zemp at the beginning of the 20th century. He carried out research work on the monastery and acquired the room for the Swiss National Museum. It was exhibited in Zurich for more than 70 years. In 2000 it was returned on permanent loan to its original location, where it can now be admired by the public. 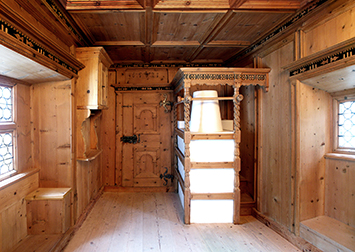 On show in the museum

The Hohenbalken room, the living room of Prioress Ursula, can nowadays be visited in the convent museum. It is a little gem; the room is only 4.3 x 3.16 m and 2.39 m high and panelled with arolla pine. There is a small stove, a cupboard and two crossbar windows with crown glass panes and shutters that can be pushed aside into slits in the wall. The window facing south is surrounded by decorative paintwork on the outside wall.