1512:
Construction of the Castelmur suite

The suite of Abbess Barbara von Castelmur comprised a large vestibule with a stokehole to the living room stove, a richly panelled parlour with a bay window, tiled stove and surrounding bench; from the bedroom there was a door to the convent archive and another exit led to a privy suspended on the façade to the north. This private, controlled access to the archive is unusual; it was later closed and replaced by a different access from the south.

A distinctive feature of the late Gothic panelling are the fine horizontal lines made in the wood before the panels were mounted. The living room panelling was decorated with overlays of a delicately carved tracery. The bedroom was also richly adorned with carved decoration. 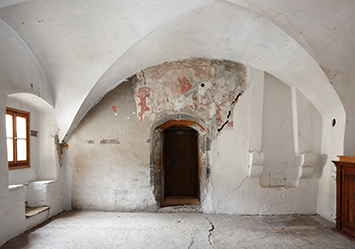 The Castelmur suite continued to be used by successors, and partially modified. In the second half of the 17th century the living room was given a coating of pale grey paint. In the mid-19th century the panelling was painted over in Schweinfurt (or emerald) green, a bright green but very toxic pigment that contained arsenic. Further coats of white paint followed later on. The layers of toxic paint became loose and were removed, whereas previous layers were left intact so that the living room can now be seen in the style of the Baroque era.

It seems that the Castelmur living room was used as a common room for some time, as there were benches around the walls. In the 20th century the room served successively as a weaving room, flour store, carpet depository and temporary office. In future this room will be a part of the novices’ quarters and will be used as a study room. 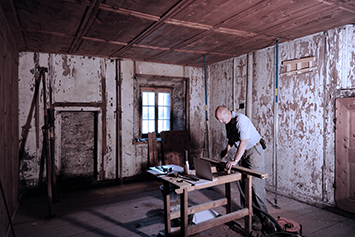 Restoration not yet complete

The former bedroom and ante-room of the Castelmur suite are still awaiting restoration. Funding for this work has not yet been ensured, so that the Pro Kloster St. Johann in Müstair Foundation is grateful for every donation that will enable progress to be made on this project, thereby allowing the nuns to finally be able to make use of their "new" study room.