1394: Convent urbarium with portraits of Charlemagne and John the Baptist

In the 1394 urbarium (inventory) of the convent Charlemagne is portrayed as founder, carrying a model of the church, whilst John the Baptist appears as the convent’s patron saint. It is thought that the statue of Charlemagne that stands in the church originally carried a model of the church. For a long time it was assumed that a representation of the convent’s patron saint stood across from the statue of Charlemagne on the front wall between the north and middle apse. Probably this served as a model for the 1394 drawing. 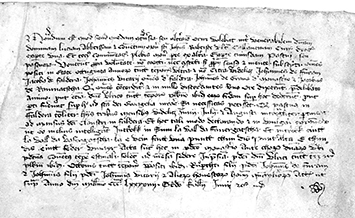 Inside the cover of the urbarium codex there is a record of court proceedings of 1389, in which a Romansh quotation is found. This is the third oldest piece of Romansh writing and the oldest in canton Grisons.