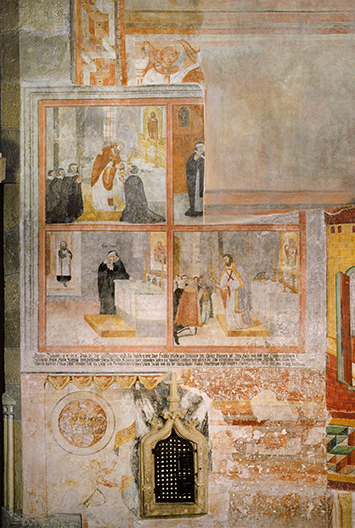 early 13th century:
Miracle of the Host of the Holy Blood

A miracle in the convent of Müstair

«The nun Agnes, daughter of a knight from Sent in the lower Engadine, received the Eucharistic Host one Holy Thursday, with a dubious conscience; she did not eat it however, hiding it instead in her veil and then storing it in her little chest. When she later observed that the host had transformed into flesh and blood, she revealed her experience to the convent priest Johannes.» (from Iso Müller, Geschichte des Klosters Müstair, p. 63). This happened at the beginning of the 13th century in the convent of Müstair

The priest Johannes fled with the Holy Blood relic to Partschins, near Merano. When the miraculous host transformed itself yet again the priest was overwhelmed, but the abbess of that time, Adelheid, prompted Father Johannes to return the host to Müstair. And so the pilgrimage to Müstair and the miracle of the Holy Blood began.

Turbulent history of the Host of the Holy Blood

The flow of pilgrims was interrupted at the end of the 15th century, when the Tyroleans stole the miracle-performing host during the Battle of Calven in 1499. However, following the victory of the Grisons and the Treaty of Basle of 22nd September 1499, and the urgings of the Bishop of Brixen, they had to return it to the convent.

In 1597 the then abbess, Ursula von Schlandersberg, had the story of the miracle painted on the front wall between the middle and north apse of the church. The painting depicts the nuns receiving communion on Holy Thursday, the miracle of the Holy Blood, the repentance and confession of sister Agnes, and the veneration of the monstrance (ostensorium). Beneath the painting is the tabernacle, where the host was kept until 1758.

In that same year the relic was moved to the specially built Chapel of the Holy Blood – nowadays the Chapel of Grace. It did not stay there for very long though, as in 1799 – during the War of the Second Coalition – French soldiers plundered the convent, since when the relic of the Host of the Holy Blood has been lost without trace. All that remains to remind us of this miracle are the chapel and the wall painting.